Coho salmon are also known as silver salmon, and are one of the most popular sport fish in the Pacific Northwest. They thrive in cold, clear water. Here’s everything you might want to know about the Coho salmon!

Cohos are Pacific fish, and live along both coasts on either side. They extend from Japan and eastern Russia on one side to Alaska and California on the other, and can also be found near the Bering Sea. Due to human intervention, Cohos have been introduced to several landlocked locations within the US, including all the Great Lakes. They like to breed in small streams branching off rivers, so they’re one of the most common types of salmon to be found in local creeks or neighborhood stream beds.

The coho salmon is a mid-range sized fish, ranging from about 7 pounds to 11 pounds. Average length is 28 inches. In rare cases, the fish can reach up to 36 pounds and be three to four feet long.

As is implied by their second name, Cohos are primarily silver, with a thick strip of dark blue running along their backs. Once they migrate to fresh water, their coloring changes drastically, more so than any other salmon: their sides become bright red, their heads and backs change to blue and green, their bellies turn nearly black, and dark spots emerge on their backs. Cohos reaching sexual maturity gain a light pink shading along the belly. Mature females tend to have darker coloring than males.

The ideal spawning places for a Coho salmon are small streams and tributaries branching off larger rivers. Gravel streambeds are best for egg laying. Since they breed in small streams, there’s not enough room for all the salmon in just a few of them, so rather than being confined to one or two main breeding spots, Cohos are spread out and can be found in most coastal streams running out of Pacific rivers.

Coho eggs hatch about six or seven weeks after they’re laid in late winter or early spring, and the young fish spend another six to seven weeks inside their nests. Once they leave, they spend one to two years in their natal streams. As soon as they start developing adult characteristics, notably the silver scales of a grown Coho, they head for the deep sea, typically migrating between March and July.
Of all the types of salmon (at least, of the ones that aren’t landlocked), Cohos spend the least amount of time in the ocean. They only live there for one to three years (two on average) before returning to spawn. Certain types of males have been known to return when they’re only two years old! Most Cohos die after spawning, making them one of the most short-lived breeds of wild salmon.

Coho salmon are the angry teenagers of the salmon world, typically acting moody and easily irritated, lashing out at other fish or flies that get too close. 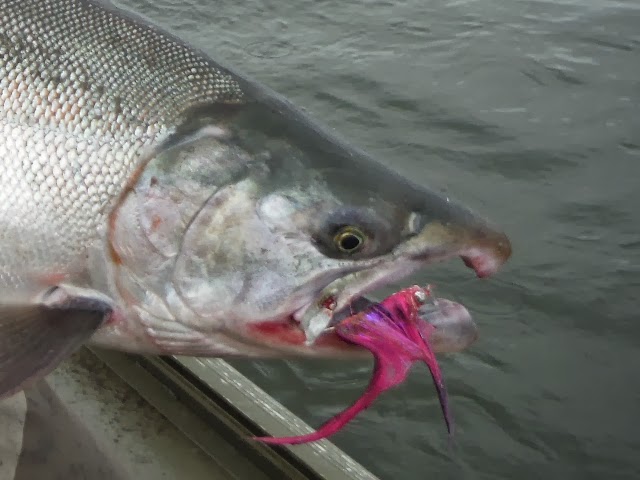 River dwelling Cohos feed on plankton and insects. As they get larger and move out to sea, they switch to eating small fish.

Since Cohos aren’t particularly large, they make good targets for all types of creatures. River salmon are consumed by bears, wolves, eagles, seagulls, and humans, while ocean Cohos are devoured by sharks and other large fish.

If you’re considering trying fillet of Coho, this is how the nutrition pans out. It’s very high in protein, with one ½ pound fillet containing about 42 grams. The next highest nutrient is fat, with 11.7 grams, but it’s healthy fat rich in Omega acids, so don’t let that scare you off. The average caloric content of a serving size comes in at 289 calories, making it a much healthier choice than a steak or hamburger.

• Coho salmon have traditionally been a staple of indigenous Pacific peoples, including Inuits and islanders.
• Some Native American tribes used the Coho as their symbol to represent life and sustenance
• About 80% of commercially caught Coho salmon come from the chilly waters off the coast of Alaska
• It’s popular among fisherman due to its reckless pursuit of baits and lures that intrude into its territory.